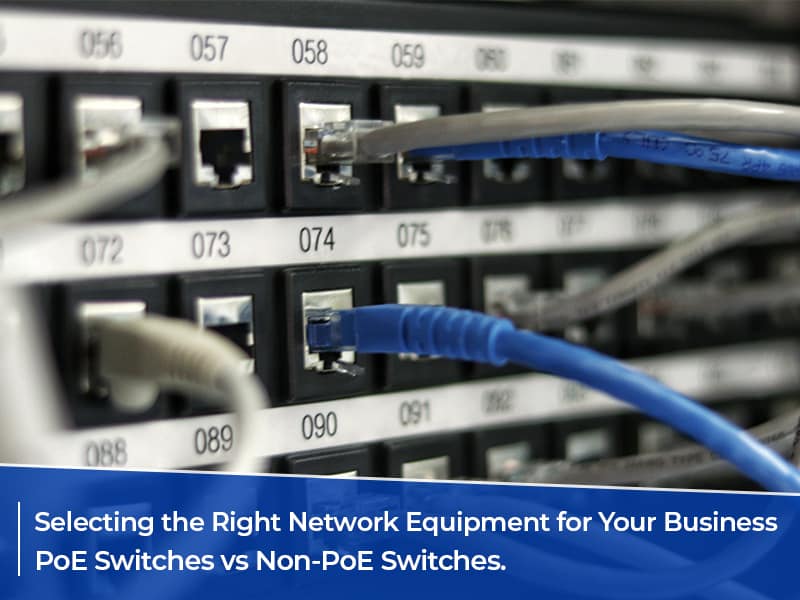 Posted at 09:04h in Communications, IT Support by accounting@vinemarketing.com

Modern technological advancements have made our work and home lives more prosperous and connected than we ever could have anticipated. But with these revolutionary advancements have come some issues. There are so many options on the market for everything tech that it can be difficult to know what tools and software are right for you and your organization. For example, when it comes to setting up a new internet phone system or configuring a network with routers and wireless access points you will have to make a big decision on whether to use PoE – Power over Ethernet – or a less expensive alternative (non-PoE switches).

Making these choices isn’t easy – especially for those with little to no technological prowess. Even though there are probably features that catch your eye, budget typically dictates your choices and with PoE and non-PoE this is often the case.

Before we get into the differences between PoE and non-PoE, let’s begin with a quick lesson on what PoE actually is. PoE provides an option of providing power via an Ethernet cable, and can allow you to massively cut down on the number of wires that need to be installed. With both your data and power travelling over one twisted pair of cables, there is much less to set up, meaning that there are also less wires to hide. Ethernet sends two signals, therefore the power doesn’t have to interfere with the data connection.

PoE is predominantly used in network connected video cameras, Wireless routers, and VoIP phones, although its uses are expected to grow with time.

What’s the Difference Between a PoE and a Non-PoE Switch?

A switch – in simple terms – is a device that learns MAC (media access control) addresses and forwards frames to the intended interface. If a switch operates with PoE, that means that it also carries power in addition to data.

When Should You Use a PoE Switch?

What we have explored so far can sound like a foreign language to those that are unfamiliar with tech – so let’s explore some of the benefits of PoE switches and see what it can do for you.

PoE irradicates the need to simultaneously install electrical cabling, so networked devices that operate using it can be installed quickly and less expensively than before. There’s no need for costly additional cabling to be installed or the need to seek the services of a qualified electrician.

PoE switches – in most cases – incorporate modern advanced hardware and software to adapt to the environment and maintain your levels of network security. The majority of PoE switches can sense whether an added component is compatible or not, which reduces the need for configuration – potentially saving you a lot of time.

You can position devices with much more ease than before with PoE. You don’t have to be mindful of installing a nearby electrical outlet, or have the headache of organizing the office in such a way that you need to consider your team’s proximity to outlets to place a camera or access point – PoE allows you to feel much less restricted on hardware placement. You can position your phones and wireless devices in the place where they actually make sense to the continued productive running of the business.

Power is delivered efficiently to PoE devices. There is no longer a worry that you could potentially destroy an expensive component – or, worse, cause a fire – due to overloading the cable, or the complete opposite, because you no longer need to worry about the system limping along and not working properly due to it being underpowered. Maintaining a safe and productive power output makes it safe, and also makes installation easier too.

Let’s say that your organization experiences a period of exponential growth, and your team needs to grow – therefore you need more VoIP enabled phones spaced out around the office, or perhaps you run a business that keeps expensive items in store, and you want to be sure they are safe, so you decide to add a few more IP cameras to improve coverage over your commercial space. You would be forgiven for thinking that both scenarios are going to be headache-inducing and a long arduous process, but with a PoE system they will both be relatively easy to do – you only have to run one additional cable and not worry about where the power source is located.

PoE switches do have some limitations, and there are certain occasions where a regular network switch may be the better option for your organization. They are as follows:

Your Trusted IT Partner

We are a trusted, licensed team of professionals. Our local experts understand what your business needs to succeed and will go to every length to exceed your project goals. We anticipate the problems that others merely react to. Our history of successful projects gives us the foresight to see complications, create solutions, and assist you in adopting modern day telephony. Get in contact now and see how we can help you solve your business challenges through the effective use of the right technology.